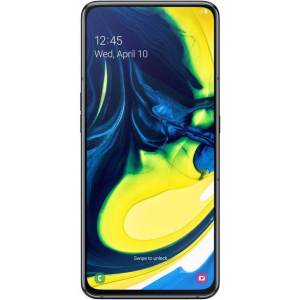 With this Samsung Galaxy A80, direct continuation of the Galaxy A70, the Korean brand intends to offer a synthesis that is often found among Chinese manufacturers, namely a device at the price of mid-range but flirts with the high-end for its features.

Heavy, imposing, the Galaxy A80 is a real eye-catcher and stands out. Although it is not usable with one hand for most people, the absence of a front camera makes it look like a mere slab. The physical keys, because there are some, are well located and do not interfere with the grip, but the fingerprint reader under the screen is perfectible. While the glass finishes are very nice, the lack of watertightness and the swivelling photo lens can be worrying in the long run. Also, the lack of a mini-jack port is always a bit frustrating and the impossibility to add a micro-SD card will penalize the most greedy users.

As for the screen, Samsung has not skimped on a very large panel, 6.7 inches diagonal, which impresses by its dimensions but does not have such striking qualities. It displays realistic colours with very few colour deviations, which are neither too warm nor too cold for faithful reproduction. The resolution of this screen is quite sufficient to enjoy a display without tiring the eyes, but its luminosity a little below will show some gaps in the most illuminated places, especially with pronounced reflections.

For the sound, there is unfortunately no headphone socket, you have to be satisfied with a hands-free kit on USB-c for calls. The single loudspeaker shows some limitations, but the vibration system at the top of the device to transmit call voices, in the absence of a second loudspeaker, deserves to be perfected.

In terms of performance, this smartphone has little to be ashamed of in conventional use. The Galaxy A80 is equipped with 8GB of RAM, which allows it to switch seamlessly from one application to another. If it is less talented for games in particular, there is no need to worry too much, the terminal remains very efficient.

The photo part is particularly rich and spectacular on this Galaxy A80. Three sensors are thus present, a main one and a wide angle, completed by a last one which has as a function to take care of the portraits. With its forty-eight million pixels, the main module promises, but at startup it's a cold shower. It has not activated the basic mode that will really make it possible to benefit from the 48 megapixels, and the quality suffers from it: details, sharpness or colors, the competition does better on a similar system. And in the dark, it only gets worse. Luckily, when the module is pushed to 48 megapixels, the results change for the better, and both sharpness and detail are finally there, with a slightly forced rendering. Unfortunately, it's not the same in the dark, and the 48 million pixels don't change anything: the photos are too smooth. The ultra-wide-angle module is a nice bonus, but the rendering is not very spectacular. Indeed, as is often the case with this type of lens, we quickly lose sharpness and detail when we move away from the center of the photo, which have the advantage of being at least original. If the portrait mode is not spectacular, it does its job well, but the real strong point is that the photo set is a single module that rotates, which allows you to benefit from all the advantages (48 million pixels and ultra wide angle) for selfies in particular. In video, the Galaxy A80 does very well in everything we can ask of it.

For its autonomy, the Samsung Galaxy A80 is penalized by the size of its battery, a little modest and does not allow the device to distinguish itself. Two days of autonomy while being quite thrifty is the maximum we can hope for.

A question or a problem on the Samsung Galaxy A80? Create a discussion and our team will answer you!

Here is a list of comparison tests available between the Samsung Galaxy A80 and others smartphones.

Access to the comparison test between Apple iPhone 11 Pro, Samsung Galaxy A80

The competitive push to make an "all-screen" phone has by now resulted in some pretty head-scratching design decisions. Starting with Apple's wide...

Satisfied or not by your purchase?

give your opinion and help users to make their choice!

There is no opinion yet, be the first to add an opinion on the Samsung Galaxy A80.

The Samsung Galaxy A80 has several versions, you will find the features of the 128GB / 8GB RAM, Single SIM version then on the (128GB / 8GB RAM, Dual SIM) alternative version, only with features that are differents form the principal sheet.

Information from the technical sheet of the Samsung Galaxy A80 are only indicative, if you notice an error, please inform us with the icon displayed on the right of each specifications.